added by rosehedgehog222
(I don't own this video.) *Warning* all about yaoi moments so if toi dislike yaoi don't watch
video
animé
yaoi
guys
l’amour
scenes
s’embrasser
melodybryant, Neko-Tohka and 7 others like this
SweetSponge dang...thts hard core stuff O_O
xXitachiXx lol cant handle no...xD
rosehedgehog222 xD lol admit it you love it
13
animé Birthdays:May
posted by LunaShay
May:
May 1, 1995 Jackie Gudelhian (Cyber Formula)
May 1, 761 UC Alex Caselnes (Legend of Galactic Heroes)
May 1 Nana Minagawa (Kakyuusei)
May 1 Chouji Akamichi (Naruto)
May 1 Kouichi Mizuno (Tonde Buurin)
May 1 Subaru (Fushigi Yuugi)
May 1 maxi (Soul Calibur)
May 2, 1754 Andre (Rose of Versailles)
May 2, 1986 Jun/Swan Jun (Gatchaman)
May 2 Airs Blue (Mugen no Ryvius)
May 2 Rail claymore (Lost Universe)
May 2 Mizuki Ashiya (Hanazakari no Kimitachi E)
May 2 Roy Bromwell (Rival Schools 2)
May 2, 1968 Hikaru Midorikawa (voice actor) Heero (Gundam W), Tamahome (Fushigi Yuugi), Zelgadis (Slayers),...
continue reading...
21
The Definition of a Weebo.
posted by Sammisaurus
A weebo is much like an Otaku. Weebo's-or commonly misspelled, Weaboo- is an over obsessive fan of Japanese culture, and are giving Otakus a bad name. They revolve their whole lives around animé and manga, usually with the main stream material. The common Otaku likes anime, and does occasionally cosplay. Weebos just cosplay and watch animé to be like the Otakus. Weebos are usually Friends with Otakus, and want to impress them. (So they watch Naruto, Inuyasha, etc.)
Most weebos speak Waponese, ou use Google translate to act like they know Japanese.
They misuse the words "Baka," "Kawaii desu,""Moshi-Moshi," "Aishiteru," and so much more.
Most of them use names on chatrooms with the word "Anime," "Kitty," "Maid," and "Manga" beware!
The otakus would like them out of their fanbase, please.

1.The word "anime" (pronounced ahn-e-may) is synonymous with, and often used to describe the art of Japanese animation.

2.Anime is not synonymous with 'cartoon' despite the populaire belief held par the uneducated masses. animé is considered to be an art form par those who appreciate it, and is not specifically intended for children like American dessins animés often are. A wide range of audiences are targetted with complicated, indepth, and emotional storylines.

3. In Japan, there are plus than 40 new animes appear on télévision per week

4.In Japon plus paper are used to print manga than toilet paper.

7.All manga is drawn par hand

8.TEZUKA Osamu is the most famous manga artis in Japan


I hope toi enjoyed these few facts that I found. 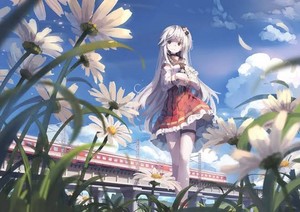 I know this fan-art sucks but it's the only one I could find that features both of them.
Well,this has been a long time coming.
Due to how much people liked my "Similarities between La Reine des Neiges and Steven Universe" article,I decided to make similar one to it.But this time,I'll liste off the similarities between two of my favori series of all time,Samurai Jack and Berserk.
Now before we get into the article itself,let's get some things out of the way.
toi see,when I was a little boy,Samurai Jack was my favori montrer growing up and now that I'm older,I honestly think it got better with time and right now it's my seconde favori cartoon of all time.

I got introduced to Berserk when I...
continue reading...