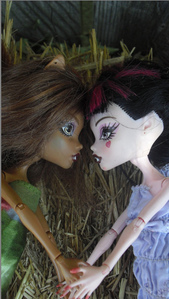 *WARNING BEFORE toi READ*
Clawdeen And Draclaura
(OK, for ONE. I know Clawdeen and Draclaura are not dating, TWO, if toi do not like fanfics that put two characters to be in l’amour who are NOT in the original stories, ou are not fond of girl and girl relationships then DO NOT READ. Simple as that, and if toi do like these stories then I hope toi enjoy. I'm new at the Monster High franchise so if I get things mixed up please don't act like your two and be all in my face about it. I wrote this because I was bored and also because Clawdeen and Draclaura are my favori Monster High chicks. They....
continue reading...
2
About Holt Hyde...
posted by CuteBlossom123 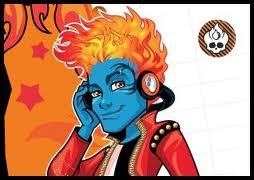 Holt is the son of Mr. and Mrs. Hyde.
He thinks he is 16 years old.
Highly expressive and extremely passionate about music, Holt is the alter ego of Jackson Jekyll and, until "Dueling Personality," is unaware of his other half.
He only appears at night and has never seen the sun, despite his best efforts.
Recent information implies the transformation might be related to loud music, ou is just another way to make it occur.
In the books, he is known par DJ Hyde and only appears when the temperature is high.
The livres provide plus background on Jackson and DJ as their mother explains they are...
continue reading...
2
Monster High,Shifting Events,ch 1
posted by Invaderskull95
It was just another normal afternoon at the school of Monster high,all the students were either hanging out in class,or about the school with friends,all seemed quite,until Headmistress Bloodgood made an announcement,

"Attention Students and Staff of Monster High"she spoke over the P.A.,"Tomarrow,we will be getting a new student",she announced,

Everyone was excited after hearing the news,

Everyone gasped in amazment and confusion,no one had...
continue reading...
3
Welcome to Monsterhigh is not a reboot from movie ?
posted by rainbowdhbrony1
OK some ghouls on toxictube (aka youtube) are saying this latest movie is a reboot but I disagree because The first movie didn't say how the school was made but I could be wrong ! I really thought this was good plus it had different Monsters in it I've never seen plus how did Daughter of the Zombies be able to speak like humans but Ghoulia doesn't and who was the diamond like rock girl in this movie she was gem-tastic with sparky looks that leave other spooks dead as a door nail plus toi can't resist the gore-fying corpse-it in this hallow- scream
reek-end later blood-tactular mummy-lation fang-oriffic monsters toi !
2
Draculaura's and Clawd Wolfs l’amour story: Chapter 1, salut I'm Draculaura!
posted by CuteBlossom123
salut I'm draculaura and this is how i met Clawd... I started of in my coffin sleeping as sung as a bug but then my alam clock rang, I got up with a shock I didn't even realise that I had my lind down on my coffin and banged my head I shouted "Ow!!!" and my father came rushing in saying "Whats happening!?!" but then a dit in a disappointed way "Oh toi banged your head again..." but then I was saying "I'm sorry father but I'm going to be late!" "Fine I'll let toi of this time..." my father replayed. I brushed my lovely long rose and black hair then put them up in pig tails after that I went in...
continue reading...
2
Draclaura and Clawdeen Fanfic 2
posted by ImBooOK
I felt her nose nudge against mine, and for a divisé, split seconde i thought her lips where going to touch mine she leaned back. "...sorry" she whispered. her green eyes looked up from their lashes. "I...i dont know how...to toi know" i raised an eyebrow at her, and smirked. "what?" she said. i started to giggle. "Its not funny!" she slapped my arm. i layed down laughing harder, she huffed and snarled at me. (whitch was cute)
"Oh like toi have kissed anyone before" she hissed and stood up walking away. "No wait!" i said, getting up to follow her. "I didnt mean to hurt your feelings.." i a dit standing...
continue reading...
2
Once a secret, now a lie - Monster High Fanfic
posted by FunkyLilz3
WARNING! - this fanfic contains sexual language, crude humor and other things. This fanfic should only be read par mature audiences. :)

She embraced his warm body in lust as he kissed her lips. Abby hadn't told her Friends she was dating Heath Burns and she never planned too. It just seemed plus fun when no-one else knew about it.

She had never told this to anybody, but being with him made her body melt. Not literally but. She was dressed in a tight hot rose dress that hardly covered her breasts and a emballage, wrap that went around her shoulders and tied at the front.

Okay so these are just a few of my new RP ideas and if anyone would like to participate in one I will make it and put it up . :) So here are my ideas and slight intros I suppose.

Only those with excellent social standing and those from rich families are lucky enough to spend their time here atthe elite monster private school  Monster Prep .

The Monster Prep Host Club is where schools most handsomest boys with too much time on their hands entertain young ghouls that also have way to much time...
continue reading...
1
About Frankie Stein...
posted by CuteBlossom123 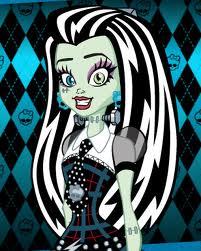 Frankie Stein is the 15-day-old daughter of Frankenstein's Monster and his bride.
She has waist-length black and white hair and has heterochromia (her right eye is blue and her left one is green).
Frankie's fashion sense revolves mostly around blue plaid prints and schoolgirl style.
In "Miss Infearmation," Frankie has developed a crush on Jackson, unconcerned that he is a normie.
However, in the suivant episode, "Hyde and Shriek," she is blushing near Holt, unaware that he and Jackson are one and the same.
After the stress both Holt and Jackson placed on her after they learned that they are, in fact, the same person, Frankie has placed her relationship with both on pause.
Her latest diary mentions a gargoyle football player with a Scottish accent, known only par his jersey number, which is 7.
Her pet is named Watzit, who is put together from several different animals, but most resembles a domesticated dog.
She is voiced par Kate Higgins.

I know what you're thinking: Cleo is my favori character! But I don't like Deuce that much. But he made to my haut, retour au début five. Deuce Gorgon is friendly and outgoing, and very confident, making him one of the most populaire monsters around Monster High. He loves sports and is one of the captains of the casketball team. He also loves cooking, but he tries to keep it a secret. He is very loyal to his girlfriend Cleo de Nile (my favorite!) and tolerates...
continue reading...
You Might Also Like...

*Flashback to a few days ago*

"I can't do it anymore ma!"
Clawdeen yelled at her mother, slamming the door and sitting down on her bed. Unfortunately, the cut on her leg was infected and none of the ghouls were picking up her calls.

She was so sad, slowly spiralling into depression. Soon after, Draculaura came to her house to apologize. Clawdeen was just lying there.

"Clawdeen?"
"What. Draculaura toi hate me for a little injury. I don't get it."
"I don't hate you."
"Yes toi do! toi and the other ghouls have been ignoring my calls and I saw how toi all went on a road trip on Clawbook!"
"Well... I - uh-umm...
continue reading...
1
Lies & Promises - A Monster High Fanfic
posted by BitterSweet65
Chapter 5: Toralei Stripe

"OOOOWOOUCH!!!! OWWWWOW!!!"
I squealed as Clawdeen was scratching me to shreds.
Of course I was scratching her back, like who wouldn't?
Guys and Ghouls were crowding around us and watched for a full minute before Headmistress Bloodgood pulled us apart.

-AFTER THE SCHOOL OFFICE MEETING-

Clawdeen got suspended from Monster High for a week. I walked outside and sat on the fountain. I sighed as I patted the black eye & divisé, split lip Clawdeen gave me.

Deuce stepped out of MH with his head-cheerleader bratty girlfriend on his arm. She kissed him and walked off with her ghoulfriends....
continue reading...
3
Seven Kingdoms ~ Chapter 2
posted by xMiss-IceQueenx
Authors Note~ salut guys it's me again with chapter 2 I hope toi enjoy lire it as much as I enjoyed écriture it. I does have PG-13 themes and other stuff like that so thanks for checking it out  This chapter is mostly HeathXAbbey but it does have Draculara , Spectra , Val and Toralei , and Ending with Cleo and Deuce also , again hope toi like it~Cali <3

The orange were-cat rose as she looked at the bright green stone in her palms that Valentine had brought her.


It was a new jour monster high but not the part that it was around Halloween. In Frankie's history class Mr.Rotter got the students to watch a film about monsters and normies but when the video finished Mr.Rotter told the students to get out(because we all know what he's like just like Mr.Hack) but when young Frankie Stein was walking out she was also was fearing about her first Halloween, just than she saw Jackson Jekyll bumped into Manny Tour. "Watch it normie!" Manny told him with...
continue reading...
1
Characters of Monster High
posted by pinkydoll 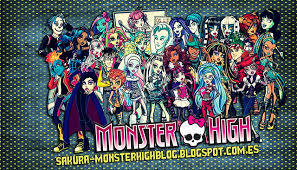 Frankie Stein (voiced par Kate Higgins) is the sixteen-day-old daughter(three-year-old as of date) of Frankenstein's Monster and his bride. She has waist-length black and white hair and has heterochromia (her right eye is blue and her left one is green). Frankie's fashion style is preppy, which usually revolves mostly around plaid prints (including lightning bolts) and schoolgirl style. In "Miss Infearmation," Frankie has developed a crush on Jackson, unconcerned that he is a normie. However, in the suivant episode, "Hyde and Shriek," she is blushing near Holt. After the stress both...
continue reading...
1
Fun fact about C.A cupid
posted by habbofirstfan
C.A. Cupid, full name Chariclo Arganthone Cupid, is the adoptive daughter of Eros, the god of l’amour in Greek mythology. She first appeared as part of the Sweet 1600 doll line. C.A. Cupid debuted in the télévision special "Why Do Ghouls Fall In Love?", in which she is voiced par Erin Fitzgerald.

Personality
C.A. follows in her adoptive father's footsteps as an arbiter of l’amour and is specialized in the dealings of relationships, though primarily those of monsters with a focus on teenagers. She hosts a daily radio montrer from her station in the catacombs beneath Monster High, during which she takes...
continue reading...
3
Three New Ghouls at School :)
posted by bratzdolly11
chapter one:

It was eight o' clock and Alex woken up to start her new day.Her mom got her enrolled into Monsterhigh.Her pet Cheesy scampered in her room with her rose fuzzy slipper and placing them at her feet,slipping them in she picked up her souris friend and held her to her face.She got up and went to her closet it was going to be great school day!

-
The lights flickered on in Victora's room,her dad smiling big and Draculaura poking her head through his tight grip on the door.She smiled."Thanks for waking me up dad."