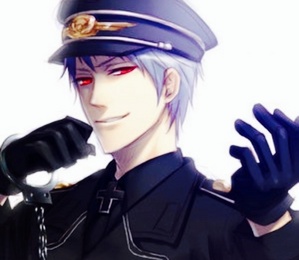 Another Gilbert image.. Lol
I think toi already know the notes from the last couple of chapters, so please continue lire this (in Gilbert's words) awesome fanfic with toi and ze awesome me!

I was riding shotgun in Gilbert's car listening to The Fear par Lily Allen on my headphones. Even though she swears a lot in this song, I don't care. She's different from everyone else. She sings songs about what the world is really like... I dream off as Gilbert started to talk.

"Hey (y/n), vhat's your... I don't mean to be rude, but..." He paused for a seconde as I took off my headphones. "What's your Vater like?" I shuddered a bit. But, I remembered the time I met him as a kid. He still looked the same, but he was kinder.. Warmer.. plus like a father I wish I had... But my actual first father died before I could ever even have any memories with him. He left too soon...

"Um.. (Y/n)?" Gilbert asked to take me out of my daze. "Oh, sorry." I replied. "My dad.. My actual one, my supposed step father, ou my actual stepfather?" I asked sarcastically. "Vhich ever one you'd like to talk about, ou Vhich one toi are plus comfortable with."

"Personally, I'm not too comfortable talking about my sexually harassing step father, my abusive substitute stepfather, ou my dead father... Sorry." Then Gilbert pulled over to the curb, unbuckled his seat, and he hugged me. Tightly. "(Y/n)," Gilbert started as he nuzzled into the (skin/color) crook of my neck. "that makes it an even bigger reason to take toi with me to mein house."

I finally feel safe.. Someone's finally taken me in that's not going to treat me like a punching bag. Then Gilbert let go, smiled warmly, and held his hand the rest of the ride to my house. I didn't see my "stepfather" 's car in the driveway. I had the keys to the door, and I told Gilbert, "My "stepfather" comes accueil at six, and it's only four, so I can take my time getting some clothes." "Okay. Just let me know vhat you've got when toi come back, then we'll go to mein house."

So I packed my (favorite/color) t-shirt, jeans, shoes, (f/c) pj's, socks, underwear, pants, plus (f/c) shirts, and a pillowcase and pillow. I packed it all into an Adidas duffel bag. I thought of what else I could bring.. I've already.. Oh. My uniforms, toothbrush, and an extra pair of khakis. I went a little rushed down the stairs, and out the door.

I told Gilbert what I had with me, and he paused for a bit. "Hmm... I think we've got enough room for all your stuff." Gilbert said, as he put the stick in drive, and started to back out of the driveway. "Okay.." I whispered slightly as I looked out the side window. "Oh yeah. (Y/n)." Gilbert started. "Yeah?" I replied, as I settled the duffel bag onto my lap. "Do toi like vurst?" Gilbert finished. "Vurst?" I asked. "No, vurst!" Gilbert explained. "What?" I asked. "VURST!!" Gilbert shouted. "Oh.. Wurst." I realized. "YES, FOR GOTT'S SAKE!" Gilbert shouted for the last time and thanked his head on the steering wheel, making it beep.

"PFFFTT!!" I laughed, and doubled over a bit. Then Gilbert stared at me, confused. He smiled warmly, patted me on the back, and we drove off. It took about 40 minutes to get to his house, and his house was about 5 times the size of mine. It was a mansion. I even heard Gilbert had a brother with good grades, but I've never met the man.

I walked outside of the car with my duffel bag strap slung over my shoulder. I closed the door, and I walked around the yard in amazement. His house was extremely HUGE. It must've been about the size of half of the Empire State building. "And oh yeah. Gilbert." "Yeah?" He asked. "I don't know what wurst is." I replied, as my eyes wandered around the frame of the house.

Then Gilbert dragged me inside of the house, locked his car door, and I gasped in amazement as he dragged me to the kitchen. Beautiful pine wood was laid across the floor, there was a black leather sofa chairs with golden pillows, a brick fireplace with several logs cluttered near it, tongs, and golden and brown oriental rugs to match the scenery. Then the kitchen.

It was splotched with beige and white checkered tiles, there was a birch wood table, tableau with matching chairs, a granite haut, retour au début counter, two stove haut, retour au début ovens suivant to each other, a microwave in the corner, and a muscle-ish German man with baby blue eyes and blonde hair waiting suivant to the four while crossing his arms and tapping his feet.

"LUDWIG!" Gilbert suddenly shouted while I jumped, and the man in front of me who I think is named Ludwig, jumped slightly then reverted back to himself. "Bruder, could toi please stop doing zhat?" Ludwig complained as he blushed a bit while adjusting his glasses. "Never mind zhat. (Y/n)'s never had WURST before!!" Gilbert shouted. Then it seems like Ludwig was cooking the entire time, because he already had a steaming plate of the stuff.

"This is mein winning recipe!" Ludwig proudly, as he settled the plate on the table, tableau and gestured for me to sit down, and try some. I sat down in a chair, and Ludwig pushed it in for me. "Thanks, Ludwig!" I complimented. Then I took a bite.

(Y/n) looks so much like Feliciano! He's cute, small, almost chibi like, but isn't as stupid and annoying as him. (Sorry, Gerita fans!) And he doesn't have a tomate loving bruder, either. I don't zhink (y/n) even has any brothers. I don't think he even has any sisters, either. "Hanks wor the furst, Vudlig!" (Y/n) beamed. Too cute.. Then I covered my mouth, and crossed my arm over mein chest saying as I blushed, "Um.. Nein problem." Then I felt someone vas glaring at me, so I looked around. Gilbert.

We can kind of tell what each other are thinking, so ve don't need to speak so awkwardly in front of any guests. He was saying;

"Vhat?! Who a dit I ever needed your approval?"

Your P.O.V. is brought to toi par guess who, aru!

The wurst turned out to be really filling, so I asked Gilbert if he could montrer me to my room while Ludwig washed the dishes.

Gilbert walked out of the kitchen, as I followed him with my bag still slung over my shoulder. I looked behind me, only to see a tall and quite muscle-ish Ludwig washing dishes with black rubber gloves.

"(Y/n)?" Gilbert asked, who I'm guessing is at the bottom of the stairs already. "Yeah. I'm coming." Then I turned around and started rushing to Gilbert. As soon as Gilbert saw me from the mahogany and or lined staircase, he started moving. I rushed a bit up the stairs, then I was close behind him.

He lead me to a room with a Queen sized bed, lavender covers, velvet pillows, white curtains, and birch wood planks for floors. There was also a boudoir, and a walk-in closet, with a bathroom connected to it. The walls were a light cream, and the lit had its own curtains.

"Hey Gilbert, I'll go ahead and take a shower. Can I borrow some conditioner, shampoo, and some AXE soap?" (I think they have their own soap, right? I know they have hair gel, but I like their scents! (^ u ^) Gilbert looked at me, surprised.

Well, this is my first time using AXE. I mean, I usually use the Suave coconut scented conditioner, and a bar of this rose colombe soap. I don't even know what the AXE products smell like. Well, I think it'll smell good. (Let's just say this is your first time using AXE, even if toi haven't, ne?)

"Don't vorry, (y/n)!" Gilbert ruffled my hair. "Just use whatever you'd like zhat's in zhere." Then Gilbert just pushed me off to the bathroom, and closed the door behind me.

The bathroom was cream colored, with a basket ou toiletries like a sponge, Suave lavender soap, a white colombe soap bar, bath beads, a bath bomb from LUSH, (lush is this soap company with the BEST smelling soaps!) a loofa, and a small towel near the tub.

I opened my duffel bag with a rip of the velcro, and I pulled out my boxers, and my giant striped t-shirt. I also took out my toothbrush, and since there was Colgate toothpaste on the counter suivant to the sink, I didn't need to pull out my own.

So I stepped in the giant tub, and basked myself in the bubbly goodness.

I couldn't get out of the bathroom.

What do I do now? I used up about half of the bath beads, the water's gone cold, and I'm all wrinkly. REALLY WRINKLY. So I'm guessing I can call Gilbert ou Ludwig, but they might both be asleep. And... I don't think either of them want to see me naked.
But, I'll call Gilbert first. But I already started to drain the water.

"I need help getting out of the tub. I already drained out all the water."

Then there was a pause.

Then Gilbert opened the door to the bathroom, rushed in, and tried to lift me up. He actually sent me up flying in the air, and I landed on haut, retour au début of him.

"Uggh.." I groaned, and I realized something.

I was on haut, retour au début of Gilbert, naked.

Then Gilbert's face was as red as his ruby orbs were, and he meekly sat up, grabbed a towel, and slung it over my shoulders, and body.

Then Ludwig walked in.

Then he blushed as madly as Gilbert when he saw me on the ground, naked. Even his hair Lost it's slicked form. He looks good when it's not slicked back.

Then Gilbert and Ludwig face palmed, looked away from me and a dit these three words:

Wait. What's THAT SUPPOSED TO MEAN?!?! 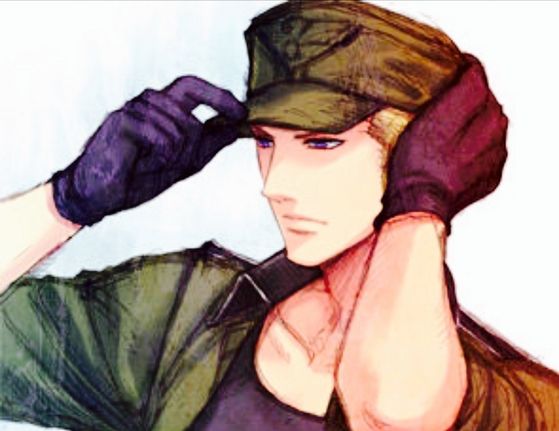 It's Gilbert's bruder! ^/ / / /^ (aka: Ludwig Beilschmidt)
LordoftheShip likes this 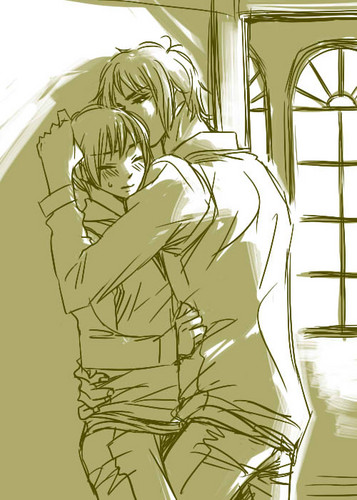 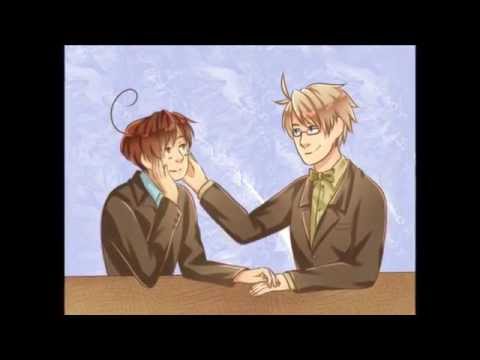 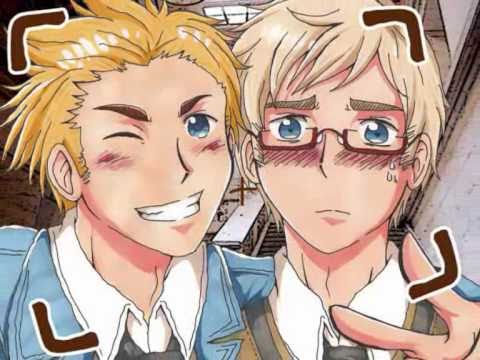 [APH] Hetalia - Sweden x Denmark
added by Englandrules83
Densu video. This is a pairing which I like too.
video

2
FrUK ~ In His Touch
added by pumpkinqueen
Why do FrUk vidéos have to be so sad. T.T
video
Hetalia
aph
animé
england
france
fruk 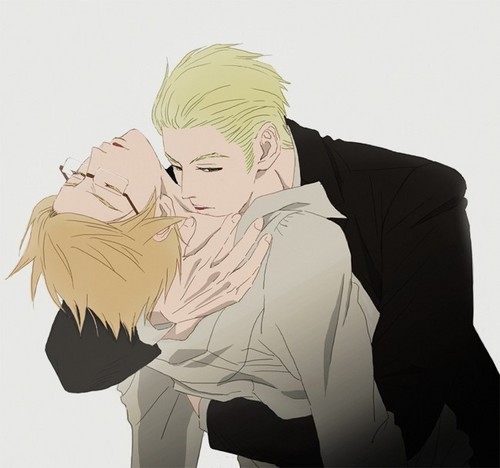 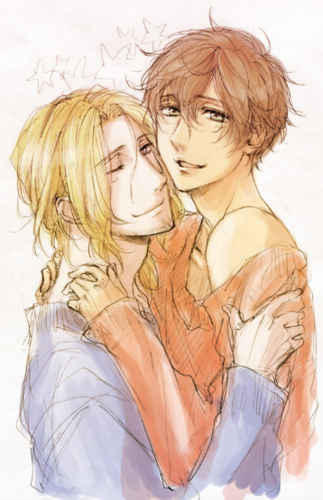 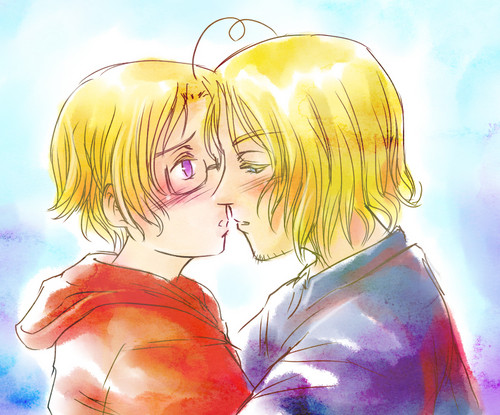 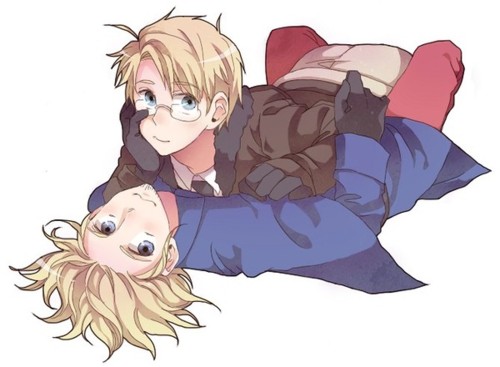 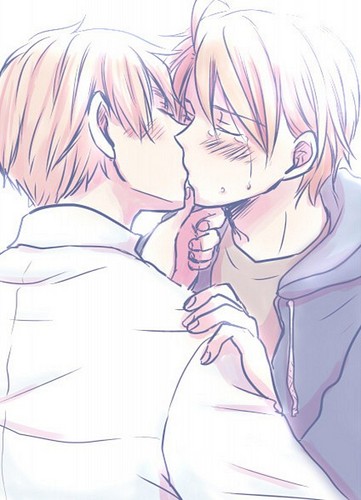 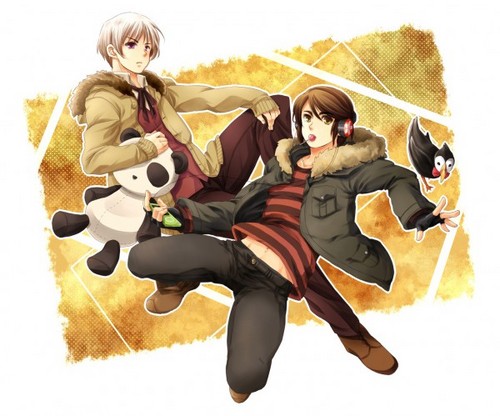 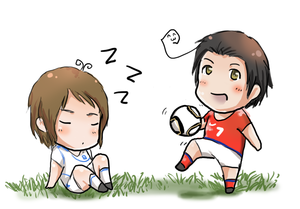 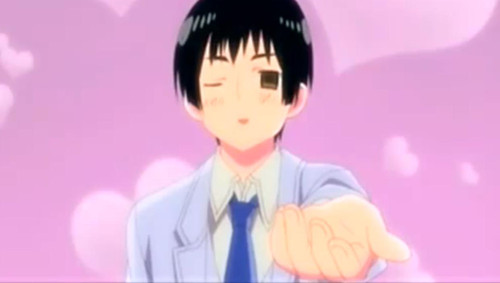 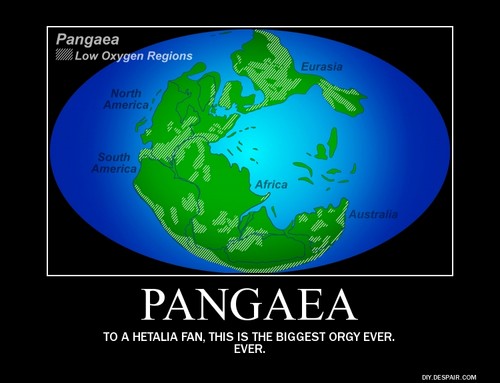 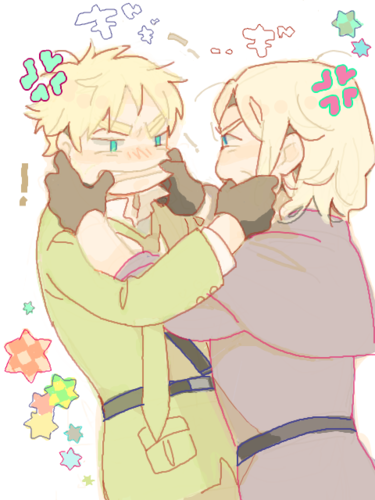 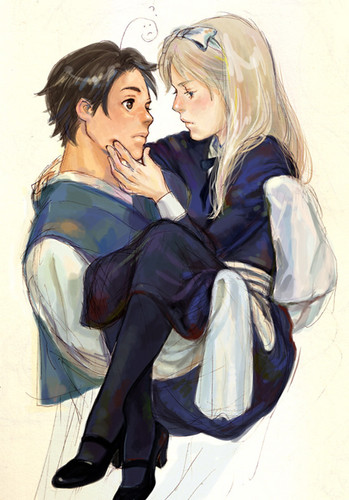 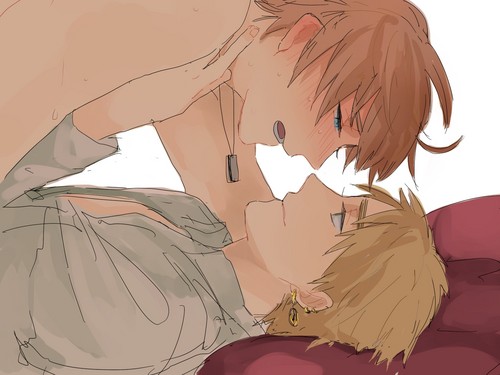 1
ukus
added by bubblegum_kiss
Source: not mine 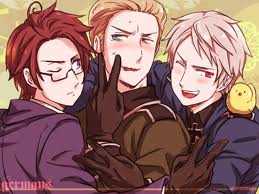 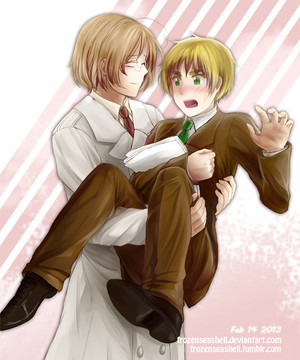