1
Annabeth Chase and the Olympians. The book from my point of view IV
posted by fencingrocks
I ran inside to get Will Solace. He was one of the best healers at the Camp. Will and I had grown up together at camp so we were pretty close. I ran into the infirmary. I scanned the room, looking for Will's shaggy brown hair. I found him, pressing a cool rag on Jake Mason's head. Jake Mason was in the infirmary a lot because he was a son of the feu god Hephaestus, and so he played with fire, a lot. I walked over to the side of Jake's bed.
"Will. Percy, he's here. But the Minotaur-"I said. I only got to there because Will was already at the door with his medical bag.
When we got Percy up on a bed, Will asked me a question that shocked me.
"Would toi like to treat Percy on your free time?" I really truly wanted to say no because that's when I got to read and I l’amour reading, but I a dit yes.

The suivant jour when I was feeding Percy nectar and ambrosia, when he regained consciousness for a few moments. I always ended up scrapping the drool off of his chin with the spoon. I drilled him with questions, but he only mumbled and through his ambrosia, I couldn't her a word he said.
Ever since, the winter solstice, the weather has been strange. It will be extremely cloudy and rainy for 10-15 days at a time. That meant that something of Zeus' had been stolen. And seeing as though it was June, that something is very important.
"What was stolen?" I must've come on aggressive (which I tend to do sometimes) because Percy's eyes grew to about the size of the hilt of my dagger.
"Wha?" Percy grumbled. Wow that made him sound rally smart.
I heard the door to the infirmary open. I didn't want to be caught asking Percy questions, so I stuffed his mouth with the pudding-like ambrosia.
The suivant time Percy woke up, I was in archery. But Argus was there. Argus isn't the best person in the world to see when your mother has just been kidnapped par Hades the lord of the dead. This is because he has blue eyes all over his body.
The suivant jour Percy finally came around for good. Grover had helped us déplacer him to the porch of the Big House. He was sitting facing away from the pinochle game that Chiron,and Mr. D were playing. I didn't care much for the game so I just leaned on the banner of the porch. I had always tried to figure what the point of the game was, but I never could. Probably because the ADHD in my brain, found a empty part in brain to explore and change the subject. I was thinking about my new architectural design. One of my dreams in life is to re-design some big city. Preferably New York City.
Percy got up and walked over to the table.
"Mr. Brunner?" Percy a dit with a great look of surprise on his face.
"Yes my child,"Chiron said. He addressed most campers as child.
Grover started to introduce people. Chiron, Mr. D. Grover always forgot about me.
"Percy. This young lady is the one who nursed toi back to health," Chiron said. I didn't like the titre "young lady" but it's better than not being introduced. "Annabeth why don't toi go get a bunk for Percy in cabine eleven."
I got to the stairs and turned. Percy was looking at me weird. I guess sizing me up. I guess that he was thinking that I should be living in Florida because I'm tall, skinny, athletic, and a natural blonde. But I don't have blue eyes, I have grey eyes, like all children of Athena.
"You drool in your sleep," I a dit as a matter of factual.
I turned military style and ran down the colline towards the cabins.
I stopped as soon as I got to the outside of the Hermes cabine to straighten out. I pulled my orange Camp Half-Blood t-shirt at an attempt to get rid of the wrinkles. it really didn't work. I was about to go in when I realized my hair was up in a messy ponytail as usual. I reached back and grabbed the elastic holding my hair up. I yanked on it. It came out with a pretty larger chunk of my curly blonde hair.
"Ow," I grumbled as I rubbed the back of my head. I shook out my hair. I walked into the cabine where I first started out.
My eyes adjusted to the dim lighting, and I saw the same depressing sight I saw on my first jour at Camp Half-Blood. Dozens of kids sitting on their sleeping bags, with only a few possessions to their name. Their Greek parent hadn't claimed them yet. Some had been here for weeks, even months.
"Hey, Luke," I was hoping that my face wasn't as red as it felt ", we have a new half blood."
"OK bring him and his stuff down," Luke a dit as a smile crept across his face. His scar crumpled on his face. I remembered the days when Luke didn't have the scar. Like the faithful jour on Half-Blood hill.
After about a half-hour, I found my self on the porch of cabine eleven reading.
Natbr likes this
TMOA1q2w Kewlio!
2
Annabeth Chase and the Olympians. The book from my point of view II
posted by fencingrocks
"Come on out Annabeth. I've heard a lot about you"' the Horse man thing said.
I was only slightly creeped out that this person thing knew my name.
"Annabeth. This is Chiron, he is the activities director here at camp", Luke a dit as he pulled me out.
I got a good look at Chiron. He had a white stallion body but instead of a regular horse head, he had a middle-aged man from the torso up. This was really confusing me. A friend I had just met had just been turned into a pine arbre and now there was this weird Chiron dude that some how knew me.
"How do toi know me?" I managed.
"Grover Iris-messaged me...
continue reading...
1
Annabeth Chase and the Olympians. The book from my point of view
posted by fencingrocks
My name is Annabeth Chase. Before toi get started lire I would just like to tell toi that if at any point during this book toi fell like this has happened to you, stop reading. Put the book down and forget toi ever started reading. Anyways this is completely fantasy.

Well, I'm thirteen years old. I'm the daughter of the Greek goddess Athena, Goddess of wisdom. That makes me a half-blood. There is thousands of half-blood worldwide. Some lead normal lives and others train to become warriors at Camp Half-Blood on Long Island New York. I've been going to that camp since I was about 7 years old....
continue reading...
3
Spot rules (sorry, the name is an insult to creativity)
posted by HecateA

Do not worry, I am trying to find an icon. I am doing my best to have one up, but my computer will not co-operate!

And yes, this banner isn`t great. I`m working on it.

Anyways, this spot needs rules so things are nice and nobody gets hurt.

1. Play nice. Common, nobody likes a bully and the fact people can`t see your face ou don`t know your name doesn`t make it different. par "play nice", I mean no rude comments, no mean commentaires to anyone, no racism, the basics. Usually the rule "If your grandma would hit toi when toi say that, then don`t say it" applies.

Rick Riordan: What I was like as a child
added by Idunn
video
interview
rick riordan
percy jackson 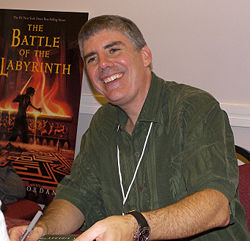 Rick Riordan
added by Natbr
1
Reasons why I l’amour Rick's writing, Reasons Why it can be much better.....
posted by mijmiD
salut everyone, I'm MijmiD,but it's ok if toi call me Mij. As toi can see, I am a pretty big Percy Jackson/Heroes of Olympus fan, and I have a couple of things to say about those books....

Reasons why I l’amour these books....

1.They're exciting and thrilling
2.Rick sure knows how to make a good couple!
3.They have death, one of the main ingredients to an excellent book
4.The descriptions are vivid
5.It's not like a Judy Moody book that has like, only 60 pages

Reasons why these livres can be better....
1.The main character always has a cœur, coeur of steal...not one tear dropped from their eye when a loved one died.
2.I think that it would be cool if one of the main characters were blind ou deaf, like Frank ou Hazel
3.The livres aren't very inspiring, like Harry Potter, I think Rick needs a life lesson in his books....

Either way I l’amour these books, but I just think it needs a little more.