Pennywise from IT
Being the horror researcher that I am, I decided to compile a liste of films featuring killer clowns. There's probably some here that you've never heard of before. A few of them are good (You'll already know which ones), but most, not so much.

Not listed in any particular order, except for the first few being the plus familiar ones.

Here's Johnny!
1. Parents just don't understand: Yes, no matter how crazy ou odd the behavior of their children becomes, these horror parents just refuse to care, say, ou do anything about it. In severe cases the statement "He/she must be on drugs!" is often spoken.

2. We travel in packs! Whether monster ou slasher, the fodder must consist of a group no smaller than six members of either friends, family, ou tourists. Another characteristic of this cliche is that the members must consist of all ranges of gender, race, and stereotypes.

3. Arise ye Baddie! Our beloved baddie has just had a bridge collapse on him...
continue reading...
1
Wish Upon (2017) Review
posted by jlhfan624

As a major massive horror fan, I think it's very important that we support the genre. To some people that's exclusive to one sub-genre but to others like me, that means everything. Now, that doesn't mean if you're not interested in something go see it anyway just because ~horror~. But I don't buy into the PG-13 horror is always bad belief that many seem to have. Not every horror movie is made for adults. Not every horror...
continue reading...
7
The Same
posted by MinnieMouse1223
Dear Reader,
Almost every single scary movie is the exact same, pretty girl, hot guy, nerd, out siders, they team up ou hate each other. Pretty girl usually dies its boring! I mean scary movie watchers are getting to where they can predict the whole movie par the first death and get it right! And when toi know whats gonna happen it's no longer scary. There are few newer scary films where the watcher actually doesn't know whats gonna happen and if toi know any please tell me.
-Gaeli (MinnieMouse)
3
Best Horror Movie Themed douche Curtain on Halloween
posted by HorriWeen

14
The ABC's of Horror films
posted by jlhfan624

WARNING: Beware that this coming article WILL have some pretty grisly/gory images. This IS the horror films spot after all! If toi do not like looking at these things, please DON'T. I don't want to be responsible for your nightmares &/or being sick. :)


Now, as for the origin of this article - well, I just wanted to try something new in this spot. I was coming up with nothing for picks, and that's usually my strong suit so I decided to try for an article instead and came up with this. Most of all, I hope everyone gets some kind of entertainment out of this. I had fun thinking of things to...
continue reading...
3
Psychotic Dwellings (a work in progress)
posted by bldwngs432
Chapter 1:

"...I am standing in front of Haddonfield Correctional Hospital were local resident Laurie Strode is being kept under strict surveillance. It has been recently discovered that Strode is actually Angel Myers, sister to notorious killer Micahel Myers. For the past year, Strode has been at this hospital after the events of last Halloween when Myers took Strode hostage after brutally killing her best friend and daughter of Chief of Police, Annie..."

The télévision screen turned black as it was turned off, leaving the large living room in darkness.

This is a story about a group of Friends Remy and Emille(Ratatouille),Pinky and Brain(Pinky and the Brain), Colleen(Pinky and the Brain), Buck, Crash and Eddie and Scratte (Sara) (Ice Age 3) who go on a trip to a
Remote cabine in the woods. Not knowing that something else is
Watching them. Something that feeds on their fear. This is my first horror book. Enjoy!!!

A Jeep is driving down the road with a Cadillac following it. In the jeep are 4 Friends (Pinky, Brain, Sara, and Buck). In the Cadillac are 5 Friends (Remy, Emille, Colleen, Crash...
continue reading...
1
Scars of the Mind: The Fading Trend of Psychological Horror
posted by Wrything
Everyone is familiar with the usual branches of horror: Jump Scares, Torture Porn, Psychotic Slasher, Unspeakable Evil, Domineering Villainy etc. Yet in today's current media stream we are slowly seeing the demise of one of the greatest mediums of the horror genre. Psychological. Now, I know some of toi know what this genre is but to those who do not it is based on the emotional and psychological aspect of the main character/characters par either exploiting ou twisting them in ways that drive them to a fine breaking point. From films such as "Jacobs Ladder" to even video games such as "System...
continue reading...
2
Children and watching horror films
posted by bendaimmortal

I originally posté this on IMDB's board for "Pet Sematary".

The kind that includes utterly disturbing and dark themes and images such as Stephen King's "Pet Sematary" ou Wes Craven's "Nightmare on Elm Street". And par children I now mean people between ages 3-12. (I suppose 2-year olds would be too young to have any attention span to watch a movie.)

Yes, I know that young children do not necessarely get serious psychological issues from watching whatever horror, some may not even get nightmares. And I know children l’amour horror. But there are so many possibilities in the genre that it...
continue reading...
You Might Also Like...

Hello, my name is Heather and I'm a horrorholic. Specifically a slasher stan. I've been watching horror films since I was a single digit an old and slashers are my favori sub-genre of not only horror but any films period. There's something very formulaic and familiar about them and they bring me inner peace. So with that said, I will be reviewing this movie from a slasher standpoint - if that makes sense to anyone at all.

Ok,this is the 1973 version,and I am doing this for those of toi scared to see.Agian from Wikipedia,to lazy to tpye up the whole plot and movie.5/5.Good stuff very very creepy,scary,eerie,strange,nightmarish.Best horror movie ever.

Starting at an archaeological dig in Al-hadar near Nineveh in Iraq, Father Lankester Merrin (Max von Sydow), an archaeologist, visits a site where a small stone is found, resembling a grimacing, bestial creature. Merrin travels onward to find the strange statue of Pazuzu, which has a head similar to the one found earlier. He also encounters two riflemen and two dogs...
continue reading...
Are toi Tough Enough?
posted by Ninjago118
This is going to be a fanfiction on my crossover story, Amelia Stone, and the horror films too. In this fanfic, headstrong and courageous 17-year old Serena wants to take on plus than she can handle and try to step up her toughness. But when her dearest aunt Audrey starts questioning and doubting her bravery, Serena must prove to her that she is plus than just her old lady's "sweet little niece" and not a wannabe gangster.

"You think you're hard?"

"You think you're all big and bad?"

Marzy Hart
Got a hankering for a little bloody humor? Then, you’ll probably want to check out the original web series, “SLICE.”

Created and directed par Daniel Ferry, this horror meets dark comedy crossover stars Marzy Hart as a woman who can’t quench her thirst to kill. Marzy also produced the 7 episodes that make up the first season.

“SLICE” recently screened at Vancouver WebFest, earning a ‘Best Horror’ nomination, and will be heading to HollyWeb Fest as an ‘Official Selection’ later this month.

I recently caught up with Marzy Hart to find out plus about “SLICE.”


How would toi describe...
continue reading...
3
Carnival of Souls
posted by victoriaprother

Carnival of Souls is a low budget horror movie released initially in 1962 and directed par Herk Harvey. (Who also stars)
Mary Henry (Candace Hilligoss) is the sole survivor of a fatal car accident following a drag race.
After the crash, Mary leaves town and takes a job as a church organist, but her new start is plagued par visions of a ghoulish man (Herk Harvey). As her creepy visions intensify, Mary finds herself drawn to an oddly alluring, deserted carnival. The surreal setting and imagery that ensues within the carnival is nightmarish and memorable, reminiscent of many great horror movies.
Overall, Carnival of Souls is a stylish, eerie, effective and chilling horror film that has earned a devoted cult following.
2
Horror Podcast “Video Palace” Marks First for Shudder and Actress Devin Sidell
posted by HollyWoodBigFan

Devin Sidell
If toi like to be spooked, then you’re going to shiver with excitement over the new scripted podcast series “Video Palace.”

“Video Palace” is described as the story of video collector Mark Cambria who after watching a recently acquired VHS tape, begins talking in his sleep in a mysterious language. Mark and his girlfriend Tamra set out to investigate the tape's origin and find themselves caught up in a web...
continue reading...
16
How the "Fan of the Month" works
posted by jlhfan624
So I wanted to make this quick-ish article about how the fan of the mois thing works. Who knows, maybe some of toi who didn't want to participate before may want to now! These things are usually done in plus active spots like spots for couples ou populaire tv shows, but this spot is NOT really that active and that's why I wanted to do this contest thing. I want to encourage plus activity! So here's just a general faq about FOTM! I hope toi participate! 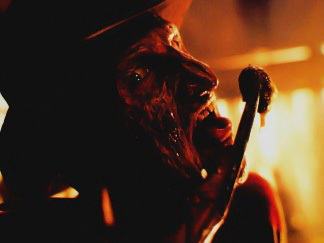 How is the FOTM determined?
A pick will be made (by me) with usernames of the people who have participated within this spot in the last month....
continue reading...
2
The Last Exorcism Reveiw and Plot
posted by EllentheStrange 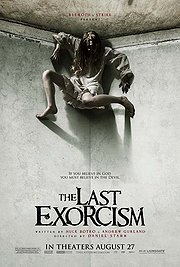 The Last Exorcism Movie Poster #1
I enjoyed the movie very much.It was creepy and scary and made me stay up half the night.It made toi think about the Devil and God and all of that stuff.As toi may ou may not know it was mockumentary horror film.It is not real footage,it is only a tease.It was made to look like real footage though.
So for thoughs of toi who are to scared to see it,here is the plot:

Reverend Cotton Marcus (Patrick Fabian) lives in Baton Rouge, Louisiana with his wife and son. Raised as an evangelical pastor par his father, he has been accustomed to performing exorcisms on "possessed" individuals. However, his faith...
continue reading...
3
Face Your Demons- A Practical Guide to Exorcism
posted by shomill

An example of a black-eyed demon
This article is a guide for all young hunters who want to learn how to handle some of the world’s most dangerous Supernatural creatures- the demons. Please take advantage of some of the tips and suggestions outlined in this text. It could save your life.*

First, the basics. How can toi recognize a demon? Demons can be recognized par looking at their eye color when they get angry. Most demons have black eyes and wreak havoc either for fun ou as part of the orders they receive from higher-ranking demons. Red-eyed crossroads demons make deals, giving people whatever they want in return for their...
continue reading...
2
My haut, retour au début 20 favori Horror Movies!
posted by Makeupdiva
Hello everyone, I thought I'd do a liste of my favori horror movies. There may be some that should be there like The Conjuring 2 ou The Woman in Black but there won't be because I have not seen them yet. There are about 20 films listed here that are my favoris and it's in no particular order. I should also mention when I put 14A ou 18A, that is the Canadian movie ratings, as I am from Canada that is what I use. I hope that cleared up a bit.