4
Christmas At The Burrow (NextGen Fanfic)
posted by cuteypuffgirl
Please read and tell me what toi all think about it! My first one *fingers crossed*

Summary: My first ever fanfic! The suivant Generation kids can't get enough during Christmas at the Burrow! All ages set two years before epilogue.

A snowball sailed through the air, nearly missing a blonde head as it hit a tree.
"Take that!" cried fifteen an old Victoire Weasley as she got up and aimed a snowball at her sister, thirteen an old Dominique Weasley. Dominique squealed as the snowball collided with her forehead. "I'll get toi for that!" she yelled, as she chucked a snowball through the air. It missed Victoire as she ducked and hit ten an old James Potter who was hiding behind her. "OI!" he cried as the snowball caught him in the stomach. Behind him, seven an old Lily Potter giggled in joy as she watched her cousins have it out in a fight to the death.

ou to the point of freezing, plus likely.

It was Christmas of course. Christmas at the Weasley family home. And to celebrate this fabulous occasion, the Weasley grandchildren decided to enjoy it the good old fashioned way.

"Ahhh!" screamed nine an old Rose Weasley as she toppled over into the snow as a snowball, aimed par Louis Weasley, hit her in the face. Albus Potter laughed in Glee as he threw a snowball at ten an old Fred Weasley. "Oh, toi wait!" a dit Fred as he rolled a large snowball and threw it as hard as he could. It missed Albus, instead hitting twelve an old Molly Weasley, who sat underneath a tree, clutching a book in her hand. "Hey!" she cried as the snowball collided with her face, knocking off her glasses. Frustrated, she adjusted her glasses and went back to reading. "Come on, Molly. Have some fun!" cried her sister ten an old Lucy Weasley as she rolled a snowball and aimed it at eight an old Roxanne Weasley. "DUCK!" cried Rose, as a douche of snowballs came flying through the air aimed par none other then...

Seventeen an old Teddy Lupin laughed as he pocketed his wand. His eyes scanned the snow covered field, he so dearly adored. Albus and Rose lay crouching beside each other, snow covering their heads. James sat underneath a tree, snowball ready at hand. Dominique and Louis both had two large snowballs in their hands ready for aim. Molly sat underneath a tree, with an annoyed expression, clutching a book. Lucy and Lily stood together, both with happy looks on their faces. Roxanne and Fred were both laying face down on the snow, while Victoire, oh beautiful Victoire, stood smiling sheepishly with a snowball in her hand.
"Teddy!!" squealed Lily in delight as she ran over to give him a hug. "Ah, hello, Lil," Teddy a dit as she nearly knocked the breath out of him. "What are toi all doin' out here in the cold?" he asked as his hair changed to a frost white shade. "Do it again!" whispered Lily as Teddy turned it to blue. "Well..." started off Victoire but was beat to it par James. "Snowball fight, care to join?" James threw a snowball into the air and caught it again. Teddy grinned. "Sure, why not?" He picked up some snow and carelessly shaped it into a ball and chucked it randomly. It landed near Roxanne's feet. "No, that's not how it works!" cried Albus, jumping up and down. "Then how does it? Care to montrer me?" asked Teddy. A wide smile spread across Albus's face.

An entire fleet of snowballs cascaded through the air, all aimed at Teddy. Teddy collapsed laughing as snowballs of various sizes hit him in various places he dare not mention.

Then as quickly as it started, it ended.

"KIDS! Time to come in! Supper's ready!" cried Hermione Weasley as appeared outside into the freezing cold. She had expected to see the children all huddled up in the snow but was instead met with a fleet of snowballs. "Ohhhhh, ahhhhh!" she squealed as a snowball hit her face. "ALL OF YOU, STOP!" she cried as she removed her wand from her sleeve and wove it through the air. All of the snowballs instantly fell and the kids' laughter ceased. "Supper's ready. Inside all of you, and mind that toi wash your hands." And so one par one, all of the kids went inside.

Indoors, there were colorful streamers and lights hug on the walls. Floating lanterns adorned the ceilings. In the center of attraction, was a glorious looking Christmas arbre with a golden sprayed Stunned gnome on top. Everything looked marvelous. There was a strong of, "Oooh,"s and "Ahhh,"s as the children entered the Burrow. The ever aging Molly Weasley stood standing at the end of the table, tableau and watched as all the children and their parents took their places at the table. She smiled an old wrinkled smile as her eyes traveled over all their faces. "Now," she began, "I can't bother with a speech so now let us thank us for what we have and Merry Christmas! Enjoy!" and with a flick of her wand, the once empty table, tableau was instantly covered in different assortments of food. There were different selections of soups and salads. There was a huge roast chicken in the middle surrounded par mashed potatoes and stews of sorts. "This is bloody awesome," a dit James Potter to his brother Albus through mouthfuls of chicken. "James!" whispered Ginny Potter who was sitting across from him, "Language!" she hissed. James laughed, as did the rest of the Weasley clan. As dîner came to an end, the entire family went to the drawing room and sat together as Molly Weasley twiddled the knobs on her old wizarding wireless as everyone clutched warm cups of cocoa. "This is the best Christmas ever, Daddy!" whispered Lily Potter to her father Harry Potter as she sat on his lap. Harry Potter smiled as the first chords of Celestina Warbeck's, 'A Little Taste Of My l’amour Potion," came on. His eyes looked over the entire room, all his family laughing and talking. His family, he thought to himself, this was his family, his very own. He took a deep breath and squeezed little Lily's hand, "You're right Lily, this is the best Christmas ever. With family and all. And to be honest, I wouldn't have it any other way."

Please commentaire and tell me what toi think about it! Thanks for reading!
angelbarbie20, medouri and 2 others like this
dragonsmemory Perfect. Write more.
peppergirl30 IT WAS SO AWESOME!! IF POSSIBLE, WRITE A SEQUEL! :D
cuteypuffgirl Okay, thanks! :)
Tawnyjay Awesome! :D
RD_Blue_demigod I never imagined how strong the impact of harry potter on us.by the way,its awesome!good job!
MoonshoesPerry A few too many age descriptions for my liking, but overall pretty good. Nice job! :)
6
12 Days of Christmas (Harry Potter Style)
posted by Liepe
Disclaimer: THIS IS NOT MINE! toi HEAR ME! NOT. MINE.
Who does it belong to then? Well, it belongs to the fanfiction writer link (Found on Fanfiction.net.) The fanfic that this song came from is called link. It's a Draco Malfoy/Harry Potter fanfic, and if that turns toi off, then I'm sorry, but please do read this song. If toi want to read this fanfic (And please do) then I must warn toi that it has MATURE CONTENT and is rated M. That is all. Enjoy!


On the first jour of Christmas my true l’amour gave to me a wilting Whomping Willow...
continue reading...
7
Harry Potter and the Half-Blood Prince: the book vs. the film. Comparison and contrast.
posted by lucius_malloy
Here's a comparison and contrast essay I wrote for school - keep in mind my English teacher has never read Harry Potter, so I had to explain stuff.

When comparing a book and a film, ou something similar, the first thing one thinks about is obviously the plot. And in Harry Potter and the Half-Blood Prince, at first glance, you'll find it's rather similar in both the book and the film. Harry, Ron and Hermione, the main trio, go to Hogwarts School of Witchcraft and Wizardry for their sixth year. They're shocked when they find out that ex-Potions Master Severus Snape has been named Defence Against...
continue reading... 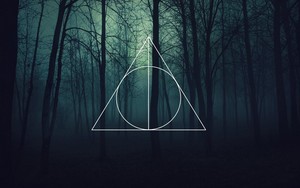 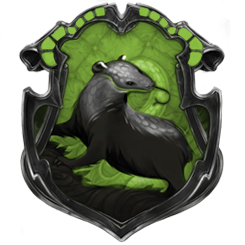 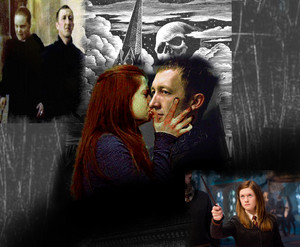 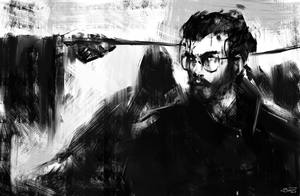 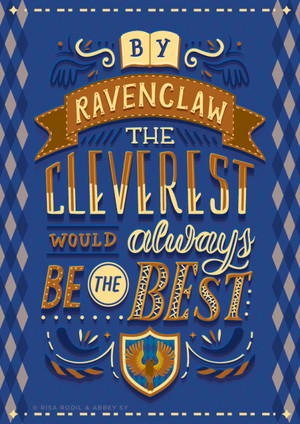 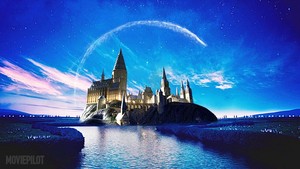 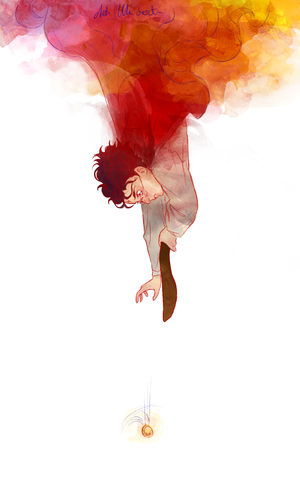 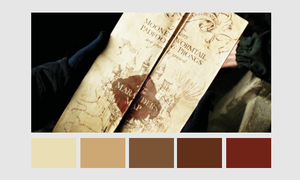 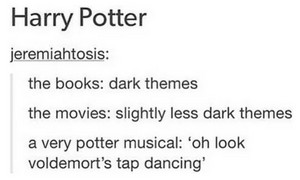 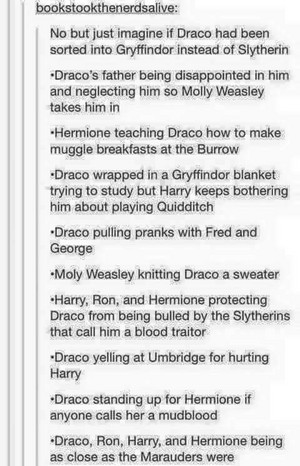 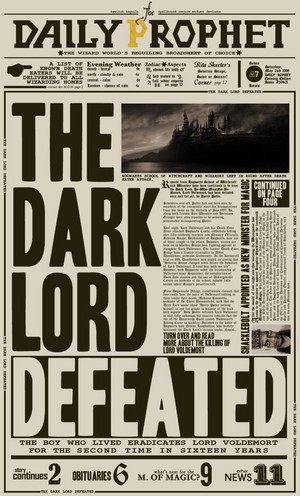 The Daily Prophet
added by Deli-Moo 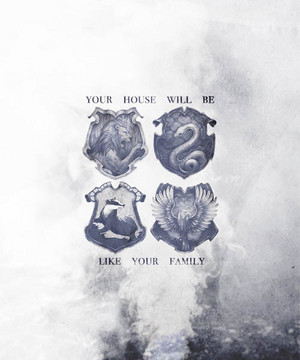 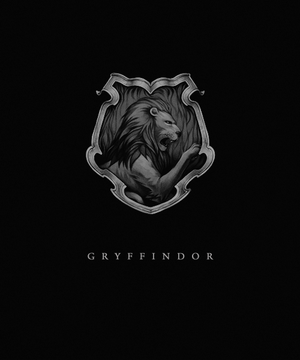 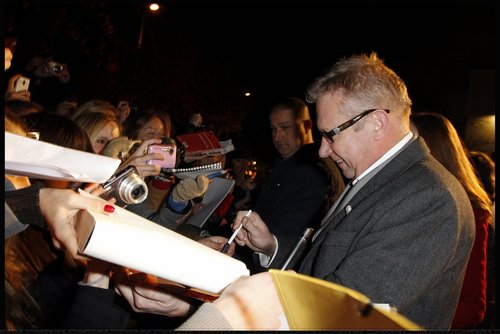 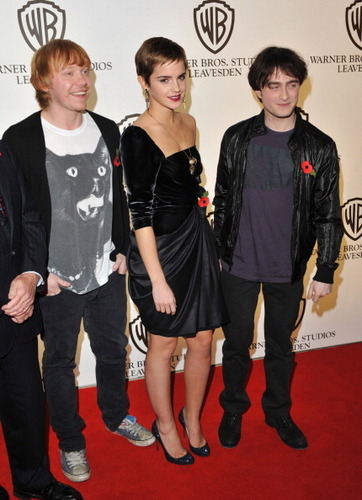 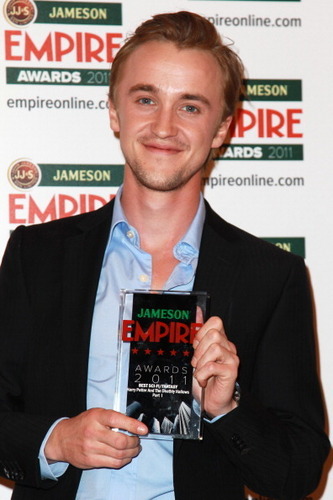