6
Elena's Diary Part 7
posted by delenasalvatore
Damon won't tell me anything until we're back at the hotel. I'm scared but I don't know why. I just know that Damon saw something out there and it worried him. And if Damon is worried then it must be bad.
There are way too many people standing about in the hotel lobby to discuss what happened without being overheard, but we manage to find another room that is miraculously empty and pull the door shut.
"Damon, what's going on?" There are a lot of things I don't know, but it seems to me that the feu at the Salvatore mansion, the break-in at Stefan and Damon's new apartment and Stefan disappearing to track down an intruder are all connected somehow. "You saw something out there, didn't you?"
"OK, look," Damon began. "I wanted to tell toi right away, and the only reason why I didn't was because Stefan didn't want toi to know."
I waited. "Tell me what?"
Damon walked restlessly from one side of the room to the other. "When our house caught fire, we thought for sure that someone was trying to kill either Stefan ou me. We didn't think they were interested in toi too." He smiled grimly. "Turns out that's not the case."
"What do toi mean?"
"Stefan had a new photograph of toi lying on the bureau in his room. It took a while before he realised it was gone, but that's the only thing that was taken from the new house."
"Why would they take a picture of me?" I asked, my mouth going dry.
Damon sighed. "I don't know. Stefan thinks it's someone who either knew Katherine, ou is directly involved with her in some way. He's gone looking for her. Though what he hopes to achieve is anyone's guess."
"What about the fire? Do toi think Katherine was behind that too?"
"I wish I knew. I doubt it, but that means we've got two for the price of one." Damon walked over and sat down beside me on the couch. "I don't know how much danger you're in exactly, ou how many people are involved ou how much they know - but when we were outside just now, there was someone following us. He was standing just inside the woods across the river."
"Did toi recognise him?"
Damon shook his head. "I don't think so."
I exhaled slowly. "I need to call Stefan."

Stefan won't answer his phone, so I have to leave a message. "Stefan, it's me. Where are you? Call me when toi get this, OK? I need to talk to you."
Why didn't Stefan mention any of this to me? Why did he take off without even discussing where he was going ou what he was planning to do? And when will he come back?

It's about 2 A.M. Damon, Jeremy and I are about the last of the wedding guests to leave the hotel. I keep checking my phone in case Stefan contacts me, but nope, nothing. I tell myself over and over that I should not be worried, and no news is good news.
As Damon pulls up outside my house, Jeremy thanks him for the ride and exits the car. Damon and I sit in silence for a moment.
"So..." he says.
"So..." I smile. "Thanks for everyth-"
"ELENA!"
I almost jump out of my skin. "Jeremy?" What's he doing, yelling like that at this time of night? Does he want to waken the whole neighbourhood ou what?
Damon and I both exchange a look and get out the car.
"Jeremy? What is it, what happened?" I demanded, running inside the house with Damon hot on my heels.
"Someone broke into our house!" Jeremy tells me breathlessly when I meet him in the living room. "The door was open, and the cuisine light was on."
I look around me. "Well, everything looks the same...maybe we forgot to lock it. It would be an easy thing to do, with Jenna and the photographer - "
Damon has already wandered into the hall. "I should check all the rooms, just in case. Wait here, both of you."
"No way, I'm coming with," my brother says immediately. I roll my eyes at him and follow him into the hall. But I know what Damon's thinking, and it makes me shiver.
After several minutes of doors opening and closing, my impatience gets the better of me. "See? toi guys are letting your imagination run overtime..."
"Elena." There's something about Damon's tone of voice that alerts me that all is not well. "Come up here."
When I'm upstairs, he and Jeremy are standing in the doorway of my room. Oh no. I left my room a total mess. I can't think what...
Then I see the state of my room and my brain goes blank. Mess ou not, I definitely didn't leave it like this. Drawers have been upturned and its contents heaped all over the floor. It's been completely ransacked.
"We checked all the other rooms, but yours is the only one that was touched," Damon says, looking at me.
"Do toi think they took anything?" Jeremy asked me.
"What do I have that they would want? I mean, we have a TV and stereo downstairs and they didn't take that." I spot my laptop lying on the floor. "And they didn't take my laptop so, what else is there?"
Suddenly, an awful thought occurs to me.
"Elena," Damon says quietly. "Where's your diary?"
TheExcorcist, HollyMarie and 4 others like this
Nianlove Please continue! 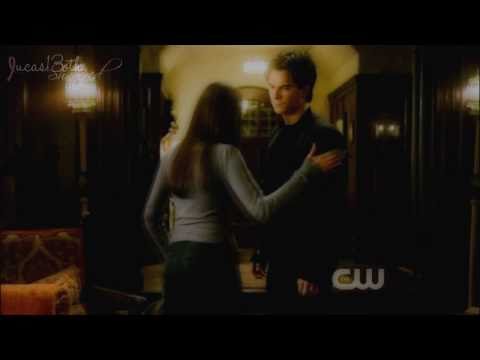 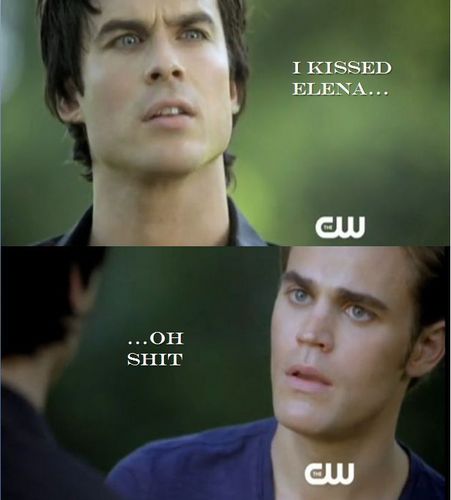 23
I kissed Elena
added by aepink05
30
Delena Are Soulmates. I Have Proof!
posted by delenasalvatore

Bonnie: When I touched you, I saw a crow.
Elena: What?
Bonnie: A crow....
continue reading...
13
Elena and Damon douche Scene
posted by Delenafan2 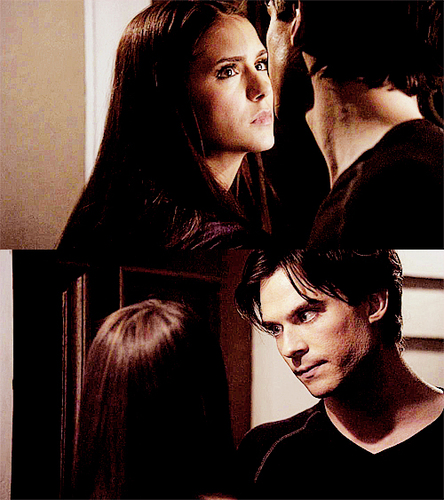 3
"You shouldn't question why I would try to save all of you."
added by Nibylandija
Source: Me (Nibylandija) 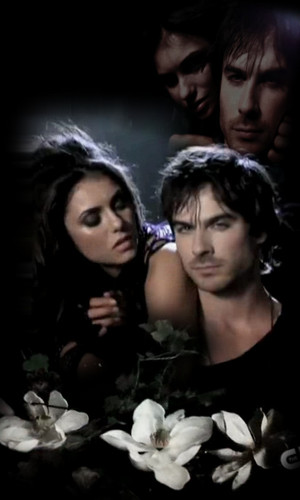 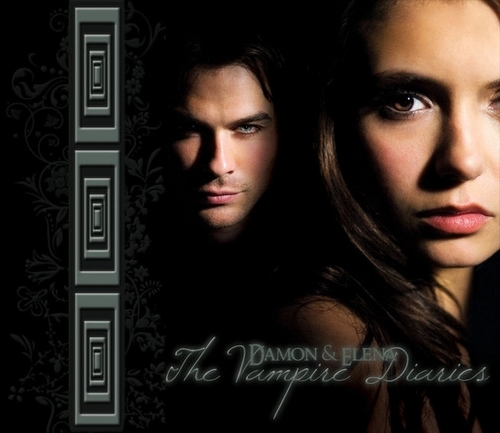 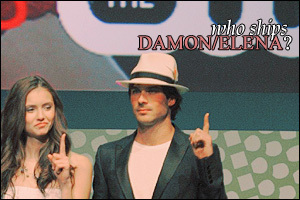 8
MDR
added by laurik2007
Source: DamonღElena #2: Because she knows it's "useless to deny it"
17
Delena October FOTM interview with Dani ♥
posted by Nibylandija

...obsessed with Delena- love them more then anything!
Ladies and gentlemen, your attention please! It’s a moment we’ve been all waiting for! The Delena FOTM crown and titre goes to the suivant wonderful and dedicated D/E fan! I bet toi want to know as much as possible about our new winner, don’t you? Yeah, that’s what I thought. So here it is… The interview with a lovely and loyal shipper from this spot - Dani! ENJOY!

1. Would toi mind starting par telling us a little something about yourself that we don't know?
Hi, my name is Dani, I l’amour listening to music, my favourite singers are Beyonce, Rihanna and Lady Gaga. I l’amour lire books! Especially...
continue reading...
7
DAMON'S POV
posted by shannon9396

Damon
1. Kings of Leon - Closer
You shimmy shook my bone leaving me stranded all in l’amour on my own
Do toi think of me? Where am I now? Baby where do I sleep?
Feel so good but I'm old, 2000 years of chasing's taking its toll

2. Hedley - Perfect
Falling a thousand feet per second
You still take me par surprise
I just know we can't be over
I can see it in your eyes
Making every kind of silence
Takes a lot to realize
It's worse to finish than to start all over
And never let it lie
And as long as I can feel toi holding on
I won't fall
Even if toi a dit I was wrong...

3. Evanescence - My Last Breath
Hold on to me love
You...
continue reading...
8
IAN SOMERHALDER biography
posted by shannon9396 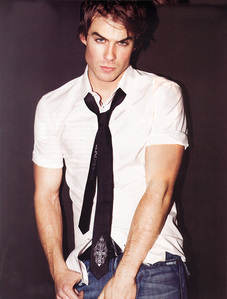 Ian Somerhalder
Ian Joseph Somerhalder (born December 8, 1978) is an American actor, male fashion model, and producer, probably most notable for playing Boone Carlyle in the TV drama Lost and Paul Denton in the film adaptation of Bret Easton Ellis’ The Rules of Attraction.
Somerhalder was born in Covington, Louisiana, the son of Edna, a massage therapist, and Robert Somerhalder, a building contractor. He has a brother, Bob, a former professional cyclist, and a sister, Robin, a broadcast journalist. His father is of French and English descent and his mother, who grew up on a pig farm in Mississippi, is of...
continue reading...

DE <3
added by tvdabst
Source: me 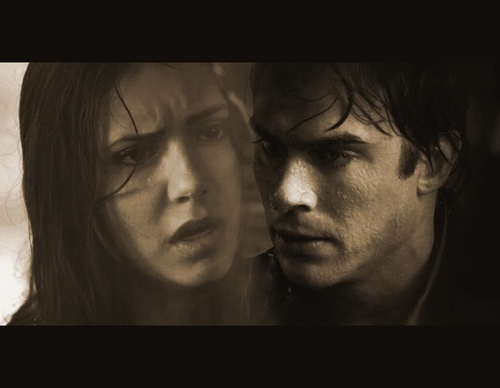 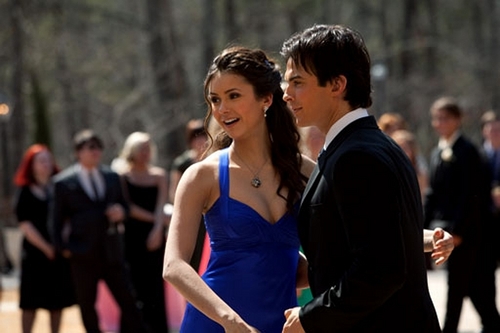