Gwen slips a small piece of folded parchment into Annis’ hand as the two queens hug each other goodbye.
“What is this?” Annis asks.
“You’ll understand when toi read it,” Gwen smiles. Annis tucks it into her belt.
“Arthur,” Annis holds her hand out, and Arthur takes it and kisses it.
“Thank toi again for your hospitality, your highness,” Arthur says. “Do not be a stranger to Camelot.”
“Well, I do intend to pay toi a visit in several months’ time,” she says pointedly.
“Ah, yes, that would be an excellent time to pay us a visit, indeed,” Arthur says, unable to hold back his smile.
Annis leans vers l'avant, vers l’avant and says quietly, “I will keep this information close to my cœur, coeur until I receive word that it has been announced. toi have my solemn promise.”
Arthur nods gratefully. “Thank you.” She understands.
“Travel safely, King Arthur, and look after each other,” Annis steps back and declares. “I wish toi an uneventful journey home.”
Arthur and Gwen both smile at this. “Thank toi again, Annis, for everything,” Gwen says. Arthur assists her to her saddle and swings himself up onto his own horse.
“I will be in touch,” he says before nodding to the Queen one final time. “Let’s go.”
They turn their chevaux and make their way out of the courtyard and back to Camelot.
Annis watches them until she can no longer see them, then withdraws the parchment from Gwen from her belt, unfolding it.
Princess Elana of Gawant.
Princess Mithian of Nemeth.
And thank toi again; your words mean worlds to me. Gwen
Annis smiles and re-folds the parchment before tucking it back into her ceinture and walking up the stairs to her castle.

Guinevere yawns and stretches, waiting for the men to finish eating. She ate almost her entire bowl and then dumped the remainder into Arthur’s dish, bringing a scowl from her brother and a chuckle from Gwaine.
She stands. “Going somewhere?” Arthur asks.
“Just going to walk around. Just right here. I’m tired of sitting. Been sitting on a horse; now a rock.” She bends down and says quietly to Arthur, “My bum is getting tired of being sat upon.”
Arthur almost chokes on his food, laughing, and Elyan slaps him on the back.
Gwaine laughs, having a pretty good idea about what she said, and Odin’s knights continue to watch and learn about this very curious group dynamic.
“I wish King Odin was this friendly,” Jerald whispers to Bradburn.
“Shh! Do not speak ill of our King, Jerald,” he says, then adds, “but yeah.”
Dishes are collected and wiped down and they prepare to leave. Gwen rolls her head, stretching her neck.
“Are toi all right, Love?” Arthur asks quietly, stepping behind her to rub her shoulders a little.
“Tired is all. Annis’ midwife a dit that the fatigue was quite normal.”
Arthur bends down and wraps his arms around her waist from behind her and plants a Kiss on her neck.
“Arthur?”
“Hmm?”
“Can I ride with you? Elyan can lead my horse.”
“Of course,” he smiles, looking vers l'avant, vers l’avant to sitting close to her, holding her as they ride.
“We are ready, Arthur,” Gwaine calls, and they walk to Arthur’s horse.
“Elyan,” Arthur says, handing the reins of Gwen’s horse to him. “Guinevere is going to ride with me. Would toi lead her horse, please?”
“Of course. Is she all right?” he asks quietly, taking the reins.
“Only tired. She just wants someone to lean on,” he smiles.
Arthur helps Gwen onto his horse and mounts behind her, holding her around her waist. “I like this,” he says quietly in her ear, and she smiles.
“Me too,” she leans back against him, closing her eyes.
“All right lads, let’s go. I’d like to be accueil before dark.”

Part 23: link
mrshafiz1, KshMcKenzie and 3 others like this
kbrand5333 http://www.fanpop.com/spots/arthur-and-gwen/images/30497678/title/lenfant-terrible-arthur-cause-own-air-push-off-photo
EPaws Guinevere is on the job. If the Queen gig doesn't work out, matchmaking is right up her alley. Charming chapter. Love the convo with Elyan and Arthur. Arthur is fit to burst at this moment, too adorable. Loved the perplexity of Odin's Knights. Gwaine was fabulous as always and yes, Guinevere and Elyan are making their peace rather nicely at the right pace. Baby Arthur and Guinevere are fantastic. Oh yeah, it began early. Now that it has hit him, I cannot wait to see what he says to her. It is clear, that Elyan has no idea who he is speaking to. I laughed hard at Arthur's internal commentary in the convo with Elyan re family. Lovely transitional chapter and Merlin was on point. Loved him. Stuff and nonsense, he is going to Ealdor and that is final and for a change, Arthur took it in the correct spirit. Yes, things are moving along rather nicely, indeed.
arwentko1 I loved this chapter Kim. Can't wait for the next installment. I just adored Gwaine ready to defend his Queen should the Knight say something about her in a negative way.
Nasty_Nat part 23 please
mrshafiz1 Arthur the protective and loving husband. I hope they'll have some private time in the next part. It's good to picture them having a good time as husband and wife.
Lucerne28 A nice treat, two chapters today. A job well done on both chapters. Looking forward to part 23.
Bonne-Bell Looking forward to 23 as well. I love this fic!
fdarcy What can I say, as always you are just one great writer I love Arthur's recall of his youth and I am happy about the make up of the brother and sister. Gawain as usual is just a delight and Merlin forever Merlin. I agree with EPaws Gwen can go into the matchmaker business if all else fails. If she could only find Morgana a good man this might take away some of her frustrations 9LOL!!!!) since we all know that, that is one of her problem.
HumbleQueen Loved that childhood memory! Feisty Gwen even then and "these flowers stink anyway" was perfect. Now we have the Elyan that we've wanted and he's the one who's giving his sister the perfect birthday treat. And yes, indeed, I'm loving the matchmaking also. And Gwaine is our Gwaine. Carry on, dear.
MOPENDRAGON I liked the way Gwen is trying to hook up Princess Elena & Princess Mithian...marry off the exes and do away with any degree of competition - smart girl. I was remiss in not mentioning it earlier but I am so enjoying the way you are writing the way others and even Gwen herself are adjusting to the truly radical reality that a serving girl is now Queen of Camelot. Reflecting on the questions asked by Annis's sons to Arthur, the dialogue of Odin's knights and how Gwen had to be persuaded not to cook lunch for the riding party. Just brilliant. Love the family dynamics - Gwen & Elyan talking and healing their brother/sister relationship and Elyan & Arthur developing more of their intimate family in-law relationship. I am just in awe of how delicious your wititng is and how addicted I am to this story! Carry on...
4
feu - Part 36
posted by kbrand5333
Part 35: link


“I never knew room-temperature chicken could taste so good,” Arthur says, taking another bite from a leg.
“That’s the beauty of fried chicken. Even cold, it’s still good.”
They are sitting close together on the sofa, a regal spread from KFC arrayed on the table, tableau in front of them. Gwen has her feet tucked up, her toes snuggled under Arthur’s thigh. She is wearing her favori t-shirt of his again.
“You know, I have an entire drawer full of t-shirts toi can choose from,”...
continue reading...
4
feu - Part 17
posted by kbrand5333
Part 16: link

They walk into the station house and Merlin announces “Cookies!” and sets the box on a table. There are a half-dozen other men inside, engaging in various leisure activities. Arthur introduces Gwen plus casually to these others, basically pointing and naming names. He tells them that Gwen is his girlfriend. Gwen’s cœur, coeur does a little flip at hearing him announce her as his girlfriend. Get it together woman, you’re not a silly teenager.
Merlin walks over, looking at his watch and saying, “Arthur, we need to change your bandages...
continue reading...
4
feu - Part 11
posted by kbrand5333
I intentionally modernized some names in this story. I apologize if this bugs anyone.


Gwen is puttering in the kitchen: setting the table, keeping an eye on the chicken, putting water on to boil for the riz noodles, chopping vegetables, preparing the dessert so she can pop it in the four when they start eating.
Morgana wanders in. “How do I look?” She spins. She is wearing a flattering émeraude green spaghetti strap sundress, robe de soirée, robe d’été with a handkerchief hemline. Her hair is in loose waves and she looks spectacular.
“Fabulous....
continue reading...
Secret Santa gift for Joppa
posted by ELockley72Garoo
This is the frist fanfiction I have written. I hope toi enjoy it.

DISCLAIMER:I do not own Merlin. Oh dear well at least I can dream
THE STORM

It was raining hard. Storm clouds rolled across the sky sending darkness everywhere. Large raindrops slashing on to the window sending thick streaks down the glass. Lightening flashes across the sky, followed a seconde later par a clap of thunder, so loud she was sure the greek gods had sent it. There was no point denying it. No point at all. She could stay awake all night, watching the storm outside but she knew it would be no good....
continue reading... 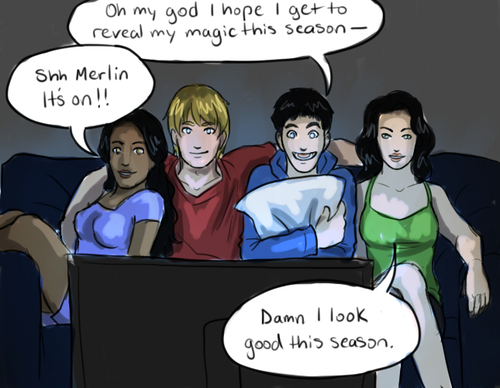 4
Cause This Is Adorbs
added by EPaws
Source: ask merlin 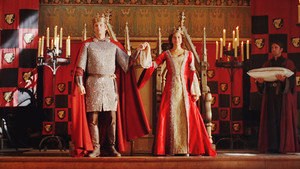 3
What would red coronation dress look like!
added by MISAforever
Source: mykingdomscome.tumblr

1
With all my cœur, coeur
added by MISAforever
video
arthur
gwen
fanvid 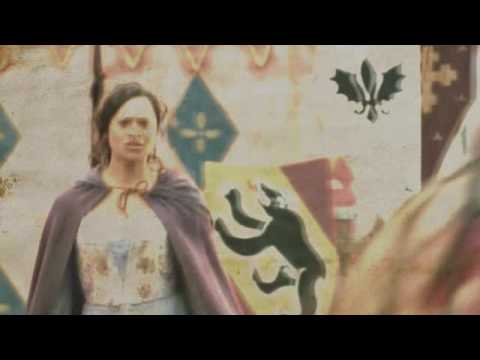 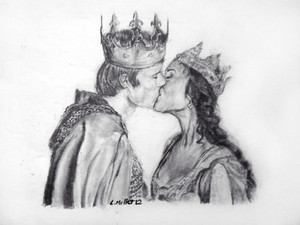 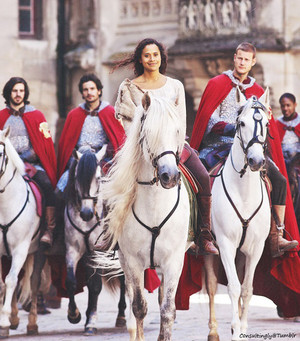 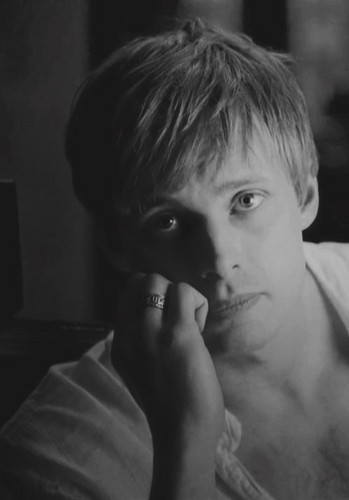