2
Memory part 27
posted by Robin_Love
“Becca...what's going to happen?”
Erin faced the young warrior and saw her face was set in stone. Cat had curled up at their feet, asleep but tormented with nightmares. Erin had tried several times to get the crystal off of Devin yet to no avail. Becca was the only one who seemed ready to take whatever was dished out.
“There is no way of telling, Erin. But after this battle is over, I know where to go.”
Erin bit her lip and looked away.
“Might I come with you? I'll have nowhere to go after.”
“Of course.”
“Thank you.”
Becca nodded solemnly.
“How can toi accept your fate so willingly, Bec?”
“Things I've done have lead to trouble. Never again will it happen. Not after this.”
The door opened and both watched her step inside. They could hear muffled screaming and the sounds of a fight just outside the door. She touched the Angel and the crystal peeled back. Devin let out a gasp for air and Erin sped over to catch her before falling. Several guards came into the room.
“We're ready for you. The fifth guest has arrived.”
At the presence of them all, Cat seemed to wake up. She clung to Becca fearfully, something not in her nature. Becca stood up, holding on to Cat.
“What makes toi think we'll play your game any more, Amber?”
The dark Angel let out a wicked laugh. Erin glared and stood beside Becca. Devin hovered over them. After a moment of hesitation, Cat regained her courage and stood beside the others. Amber smirked at them.
“If it's a fight toi seek, heroes, a fight toi shall get.”
Cat let out a strangled cry and all eyes turned to her. His claws sinking into her stomach, Teague held her possessively, lustfully.
“I l’amour the sound toi make when toi scream,” he whispered.
It sent a cold shiver through Cat's body. Becca growled and pulled a dagger from her boot.
“LET HER GO!”
She moved to strike, but was tackled par a few of the guards. Erin sped over to help. Amber flicked her wrist, sending the speedstress into the arms of a few plus guards. Becca struggled, seeing chains being thrown to get Devin out of the air. The was a loud roar, almost animalistic. All eyes turned to see Teague bleeding on the floor. Cat's eyes glowed red and she growled deep in her throat, bloodthirsty. Becca and Erin looked at each other.
“What is this?!” Amber demanded with fear and hate
“You just awakened the Forbidden.” 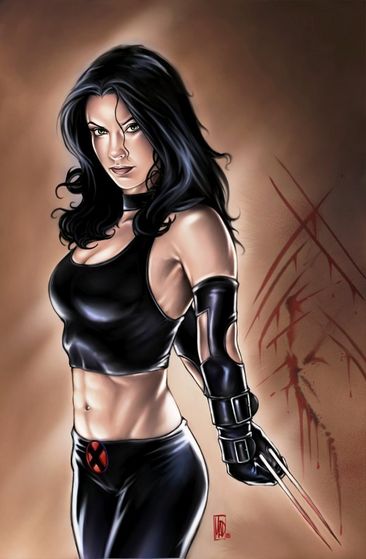 "You have awakened the Forbidden"
BladeYJ and The_Writer like this
The_Writer The words that come to mind as a guard in that room are: "Oh shit. RUUUUUUUUUUNNNNNNN!!!!!!!!!!"
Eclipse-YJ OOOOOOOOOOOOOONMMMMMMMMMMMMMMMMMGGGGGGGGGGGGGGGGGGGGGGGGG!!!!!
Robin_Love Hehe. I couldn't help it. A little more article set up
BladeYJ ;D Moar!?
FangYJ ((:O))

Bentley
added by Mclovin_69
Harley to skylar
posted by Obscurity98
Trying to explain to Skylar why and what she wont say, and why the past may not matter, and why life sucks

Powers: Ability of which she can control someone, ou a group...
continue reading...
Nudge info *updated*
posted by XxKFforeverXx

Past: Created as a experiment just like Fang, Nudge escaped at the age of 9 along with Max, Izzy, The Gasman, Angel, and Kylie. She traveled wherever Fang went, except when it came to dealing with Seraphs. Nudge was a hero, until her powers spiraled and went out of control. Turning her eyes completely red.

Notes: -Nudge has a 10 an old brother named Keaton
-Nudge has long hair in civvies and short hair in villain
-She is part vampire
-Nudge now has black bat wings.

1
Becca and Sam
added by Robin_Love

My Verison of Blade!
added by -BelovedRobin
Source: Pixiv Id 723316
Mirror Image
posted by InfinityYJ
This is my new one-shot, commentaires appreciated.
I'm on a writer's block with Last Hero... it'll be up soon... i think... just... read this instead.

To wake up confused, was not surprising. I was often woken up confused, but usually made assessment of the situation very quickly-- captured par Joker, being held for ransom, in the infirmary because a villain (namely Chelsea) had shot me, ou broken a limb, ou ruptured something and made me internally bleed. But this, this was very strange. I was in a room full of mirrors, literally, made of mirrors. There were five mirrors surrounding me, no visible...
continue reading...
Harmonian's Bio
posted by BloodyMascara_

Civies: Usually a white t-shirt and jeans will due, an occational veste aswell.

Powers: When he sings a special chorus, he can create ou repair items such as..... a collier made of pearls, he sings "Build it up with silver and pearl, silver...
continue reading...
1
Friends
posted by Robin_Love
A little...bromance I guess. Enjoy.

2
Some OC's As Wolves!
added by BladeYJ
Source: Webz. But I did éditer a bit of it!

The REAL Goodbye to Batman...
added by The_Writer
1
15 Suggestions for Making Good OCs
posted by AislingYJ
Okay don't be hating on me for this, I'm not trying to start a fight. I just think that we'd all be better off if we at least read these and thought about them, even if just for a second. I'm gonna say this right now: these are not cut-and-dry rules. par no means am I forcing toi to follow them, and there will be exceptions. These are just suggestions, on how to make your OCs well liked and better off. So, with that being said, in no particular order, here are 15 suggestions for making good OCs.
1. Ask yourself if making a new OC is really necessary.. Don't contribute to the overcrowding unless...
continue reading...
More Cards
1234567891011